In Case You Missed It - YES means "Yes" 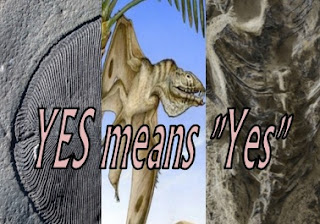 A recent study on a Pre-Cambrian organism sheds a bright light on the age-of-the-earth debate:

Russian doctoral student Ilya Bobrovskiy and a research team of Professor Jochen Brocks from the Australian National University carefully collected organically preserved specimens of Dickinsonia from steep cliffs of the 558-million-year-old White Sea area of Russia.  From the thin layers of organic material on these specimens the scientists could extract biomarkers that specify the type and amount of steroid lipids that were present in Dickinsonia. ... they found a very high amount (85-93 percent) of C27 cholesteroids, which is considered to be a hallmark of animal cells.

Hold the phones!  I thought organics don't last M's of years?? [1]  Let's go with the evidence and question the dating method.

Research published this year detailed the discovery of a 210M year old pterosaur found in Utah.  This puts the oldest pterosaur 65M years before the prior estimate.  If all Essential Type of Life (ETL's) existed at the same time this is exactly what we would expect - it's called range extension. [2]  Chapter 3 of our book YES - Young Earth Science explains ETL's.

A paper published earlier this year in Nature disclosed findings about a 240M year old lizard.  That's 75M years older than what was previously thought.  Another range extension!

Apparently, these scientists have not read YES - Young Earth Science to discover the powerful evidence from history, philosophy, biology, geology and physics for a youthful world.

Be sure to visit our site early and often ...
TotalYouth.us ==> "for Total truth, support earth's Youth"