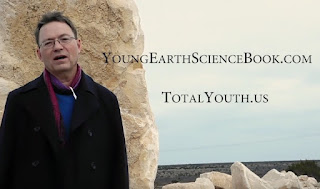 President-elect Donald Trump said he will be the “greatest jobs producer that God ever created” in a recent press conference (1-11-17).  Does the Donald Deny Darwin??  In a prior post we discussed how Pence views evolution.

If the earth is young, then Darwinism must be a distant memory.  How does radiometric dating work?  If certain fundamental constants of physics have varied, could this alter radiometric decay rates?  What about the sun?  Is this planet really 4.5 billion years old?  What is the significance of the human footprints discovered by Mary Leakey in Africa in 1976?  Does history, geology and biology support Young Earth Science (YES)?

Check out our latest video and find out.
For more info on these trending topics, see our site:
http://www.youngearthsciencebook.com/
short cut  >>  TotalYouth.us
contact us at  YoungEarthScience@yahoo.com

When dealing with origins research many related questions arise:
If Aliens arrived wound they deny Darwin?
Do the folks in Roswell, New Mexico hold to a young earth?
Has the universal gravitational constant ever varied?
How many of the Apollo astronauts accepted evolution?
Is there a conspiracy to keep YES out of the public square?
Does the Mayan calendar favor a youthful planet?
Can cryptozoology shed light on the old earth/new earth controversy?
Why are there worldwide traditions of a global watery catastrophe?

**special thx to Paul Humber for pointing out the Trump quote
Posted by Truth Seeker at 12:10 PM